How much does it cost to create a navigation app like waze?

Navigation apps are a type of app that will always be in demand. Learn how to create a navigation app that will be able to compete with giants like Waze, and find out how much it will cost you to develop such an application.

Since the early days of smartphones and pocket computers, a lot of different types of applications have come and gone. However, GPS navigation apps stay popular to this day. The reason is obvious ? being able to find your way to any place you need will always be useful.

Share of Americans who used their cell phone for online map or navigation services in the last four weeks in 2018, by age. Source

Furthermore, according to the research, over 50% percent of US citizens of almost every age use their mobile phones to access some sort of navigation service. Such a consistent popularity among all generations is an incredible selling point for this type of apps. If you?re positive about the cost recovery of such a project and ready to try to create the best GPS navigation app, here is what you?ll need for a successful start.

WHY CHOOSE WAZE AS AN EXAMPLE?

Since the earliest car navigation apps, the applications people use have changed quite a lot. Many new additional features have become a standard in the industry. The Waze navigation app was one of the pioneers of this new generation of guiding applications.

Waze was initially released as FreeMap Israel in 2006. In its core, the main target of this project was to create a full and free user-supported and updated map of Israel. Later, the app evolved and transformed, but the main features of free access and the ability to set up points of interest have stayed there. These main aspects, also including a great monetization method and a bunch of new features, have led to a subsequent deal between Google and Waze in 2013. The IT giant paid $996 million to acquire the company, which meant that each employee gained around $1.2 million. It still remains one of the biggest deals in the IT sector in Israel.

Today Waze is the second most popular navigation app in the world (beaten only by Google Maps). Such a great history of success makes the company and the app they?ve created a great example for you to aim for. So, what do you need to know to create a navigation app like Waze and how should you proceed?

As we?ve already covered, there is a lot more to modern navigation apps than just being able to hook you up to the Global Positioning System. If you want to develop a navigation app like Waze, you need to learn how does Waze work and which features make it so popular. So, here are some of the most important ones.

Although there is an abundance of new features, you cannot skip navigation if you want to build a navigation app. Waze is equipped with a great navigation engine that not only determines your relative position and calculates the best route towards your destination, but also analyzes such data as the speed of your car and user reports (more on that later) to determine the points of interest for you to avoid (such as spots with heavy traffic or locations monitored by the police). The Waze maps also work offline, so the user doesn?t need to worry about getting stranded someplace without an Internet connection.

These features became the biggest advantages of the Waze app, and soon got picked up by its competitors. Basically, they?ve made social media for drivers ? you?re able to create an account, share your driving experience, inform other drivers about dangerous or otherwise curious sections of the road, and you can evaluate the usefulness of a comment by giving it a like. Recent updates allow you to share the prices of goods at a particular establishment, which means that the company plans to further develop these features. And if you want to create a similar navigation app, you will have to keep up.

This awesome Waze feature basically unites the app with a calendar. With its help, you are able to plan your driving more thoughtfully and carefully and get notified on the time and a date of a planned ride. You can also add the information about the journey you?re planning to your Google Calendar or Facebook to inform your friends that you?ll be away or to entice them to join you. All in all, it?s a great feature that reinforces the role of Waze as the best truck navigation app. 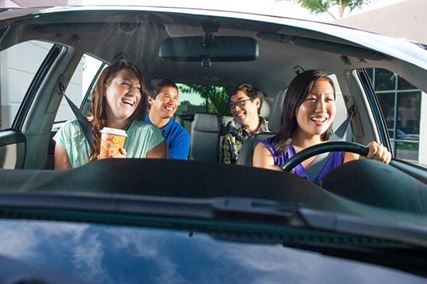 This is more of a recent feature that has obviously been inspired by the popularity of such applications as Uber and Lyft. The name of this service is Waze Ryder, and what makes it different from its competitors is that it's made mostly for carpool ? it analyzes the popular courses the driver makes and suggests a passenger that needs to get someplace along one of that courses. It is surely not as great of a basis for a business opportunity as the apps mentioned above, but it is enough for a driver to pay for gas and passengers can save some time, connect with the other person and maybe join them on the road on a regular basis.

Although this is not the biggest and the most important element of the app, we need to talk about the way Waze gains money. As with most other free apps, they sell advertising spots. However, the way they incorporate them is a bit different from anything else. Their promotion is based on where the user is located at the moment. So, any shop or coffee place can buy a spot so they?d be able to draw attention to themselves while a person is driving or walking pasto them. It is a very creative way to highly increase the relevance of ads.

THE COST OF A WAZE APP CLONE

There is a number of various criteria that influence the price of the development of an app. And although we listed all the most important features your app should include, there are a lot of things we didn?t mention that heavily impact on the overall price of the app, such as:

All that said, you can still make a rough estimate for a Waze app cost. Professionals estimate that such an app requires around 1,000 hours of work to produce. Which means that, depending on where you are, an average cost for developing your navigation app would range from $30,000 to $40,000.

Waze is a great application with an inspiring story of success. It would be very hard for anyone to repeat it, especially if you want to try it in the same field, thus making yourself Waze’s competitor. However, with a lot of work, passion for your project, understanding, the ability to work with tools for car navigation app development, and complete dedication it is definitely possible. If you’re still in doubt as to whether or not you should challenge the giants, remember that people will always use navigation apps, and if you have a great innovative idea – they will choose you. Who knows, maybe your app will be bought by Google next.